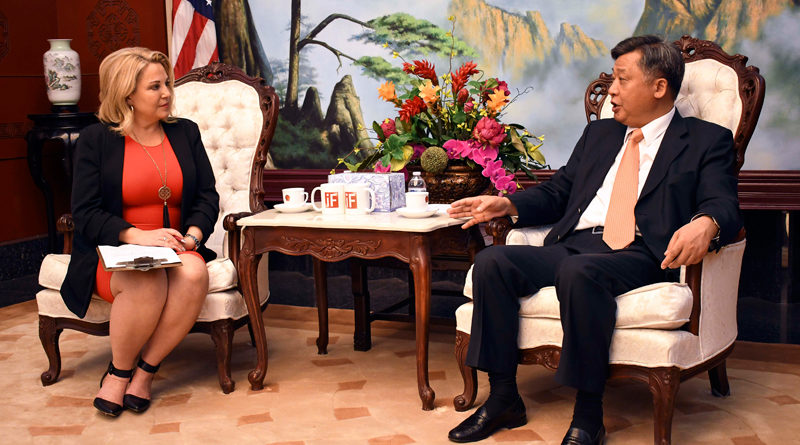 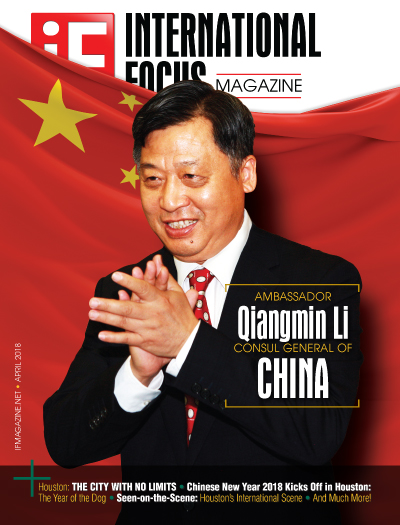 A: First of all, I would like to thank you for this interview. International Focus is a magazine with an international perspective, and I really appreciate that.

I was born in May 1957. I graduated from Central South University with a degree in Philosophy, obtained my MBA in the Netherlands from the Research Institute for Management Science in 1988. I joined Foreign Service in the year 2000. Before that, I had been working in China’s Hunan Province for about 20 years. I was in charge of economic and trade issues, like promoting foreign investment in Hunan, and introducing Hunan to the outside world. From 1991 to 2001, I served as Director and Deputy Director-General of the Foreign Trade and Economic Cooperation Department as well as the Foreign Trade and Economic Relations Commission of China’s Hunan Province.

Since joining the Foreign Service, I served as Counselor of the Chinese Embassy in the State of Israel, ambassador to the Republic of Uganda and the Republic of Zambia, Special Envoy to the China-Pacific Islands Forum Dialogues.

From May 2014, I have been serving as the 13th Consul General of the People’s Republic of China in Houston.

Q: Tell us about the Consulate-General of the People’s Republic of China in Houston. What parts of America are covered by the Consulate and what are the services it provides? What does a Consul General in your capacity do?

The basic functions of a Consulate General include providing consular protection to its nationals and issuing visas for foreign visitors. We have quite a number of Chinese Communities in the Southern U.S., in the major cities like Houston, Dallas, Miami and Atlanta. My colleagues travel a lot to offer services to our nationals in the consular area.

Furthermore, we are committed to enhancing China-US pragmatic and regional cooperation, exploring opportunities and promoting exchanges and cooperation between China and our consular district in the United States. I always say that the Southern U.S. is a “rich mine” in terms of bilateral cooperation. We have great potentials of cooperation in energy, education, health care, agriculture, innovation and many other areas.

Q: What are some past, present and future goals for China’s relationship with the U.S.? 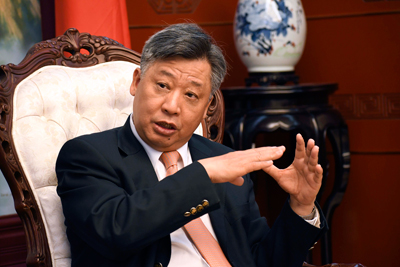 A: In 1979, Chinese leader, Deng Xiaoping, was greeted with a cowboy hat at the Houston rodeo during his visit to the states and waved to the audiences. This impressed the American public of the open and friendly attitude of Chinese leader and marked a turning point in Americans’ views of Communist China. This year is the 40th anniversary of China’s reform and opening up. Next year marks the 40th anniversary of the normalization of the relationship between China and the United States and Mr. Deng’s visit to U.S. The 40-year history of our country’s reform and opening up keeps the similar pace with the 40-year development of China-US relations. We cherish the fruitful results of reform and opening up, as well as the development of the bilateral relations.

China-US relationship has been one of the most important bilateral relations in the world. In 2017, we made important progress in this relationship. President Xi and President Trump maintained close communication, which has provided strategic guidance for the relationship. Four high-level dialogue mechanisms were set up and worked successfully. Hopefully these mechanisms will continue to work well this year. Both sides have kept active coordination and collaboration in bilateral, regional and global issues.

The key to a successful relationship lies in mutual respect and win-win cooperation. Harmony but not sameness, diversity but not confrontation. These values are deeply rooted in the Chinese culture. This philosophy underlies in our proposal to build a community with a shared future for mankind. This philosophy also inspires us to seek a new model of relations between China and the U.S.

Q: Tell us about your perspective on ways that U.S.-China cooperation may be furthered.

A: As the largest developing country and developed country respectively, China and America working together will bring not only our local benefits but also the global. Both sides agree that we share broad interests and important responsibilities for global peace, stability and prosperity. Our two countries are to carry out broad-based cooperation on the basis of mutual benefit, manage our differences constructively, deepen mutual understanding and friendship between people, and work together to address major regional and global challenges. We ought to work for sustained, healthy and steady growth of our relations.

Cooperation is the main thrust of China-US relations. I would like to highlight the cooperation between China and Southern U.S. Chinese direct investment to the 8 southern states (my consular districts) has been over $21 billion. According to the latest report jointly published by National Committee on U.S.-China Relations (NCUSCR) and Rhodium Group, Texas is one of the top recipients of Chinese FDI in the U.S. Since 2000, Texas has received more than $7.9 billion Chinese investment with nearly 5400 jobs. China has become the 3rd largest trade partner of Texas, with a rapid growth in service trade. The top service export products to China are travel and education.

Frequent people-to-people exchange is of vital importance for the bilateral relations. Our people enjoy close and extensive exchanges. According to the latest Gallup poll, more than 50 percent of Americans have a favorable view of China, the highest rate in nearly three decades.

If there is any competition between us, it has to be healthy and positive. We may have competition, but we don’t have to be rivals. Instead, we should strive to be partners. As for trade frictions, history tells us that trade war is never the right solution. In a globalized world, it is particularly unhelpful, as it will harm the initiator as well as the target country. We hope China and America will have a calm and constructive dialogue as equals and find a win-win solution. 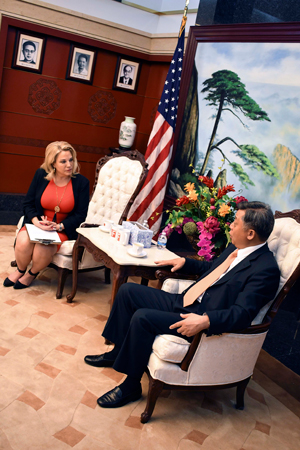 Q: What are some big issues facing China today?

A: The 19th National Congress of the Chinese Communist Party was held in Beijing from October 18 to 24, 2017. The congress has drawn a new blueprint for China’s future development. It has planned a new timetable and roadmap for China’s development in the coming decades. Namely, building a moderately prosperous society in all respects by the 100th anniversary of the CPC in 2020; realizing socialist modernization by 2035; building China into a great modern socialist country by the middle of this century, featuring prosperous, strong, democratic, culturally advanced, harmonious and beautiful. At that time, the People’s Republic of China will celebrate its 100-year anniversary.

China’s first and foremost issue is still development. As socialism with Chinese characteristics enters a new era, the principal contradiction facing Chinese society has evolved. What we now face is the contradiction between unbalanced and inadequate development and the people’s ever-growing needs for a better life. Contrasted with China’s previous main contradiction in development, the new contradiction has shifted to a new level, but is still a developmental problem. We currently have over 30 million in poverty but we are working diligently to solve this challenge.

Q: How is the Chinese business community uniquely positioning itself to help Americans who are interested in doing business in China?

A: China and US are different in culture and traditions, as well as legal and tax systems. The Chinese community in U.S. is familiar with business and cultures in both countries, which makes conducting business with China much simpler. Chinese community has done a lot to promote trade and investment between our two countries. For example, with the community’s help, Houston Mayor Turner’s visit to China was a great success. What’s more, many local Chinese have excellent academic and professional experience. They therefore gain an edge in exploring local business resources.

A: I would like to emphasize that China will keep following a path of peaceful development. Furthermore, China will become even more open. We insist to improve the quality of the opening-up. We will further ease market access, further protect the legitimate rights and interests of foreign investors. All businesses registered in China will be respected and treated equally. China has a vast market and the international businesses will benefit from it.

In the coming November, the first China International Import Expo will be held in Shanghai, China. This is the most important and a 1st-class World Expo focusing on IMPORT. The Expo consists of exhibition for both goods and services, and over 150 thousand buyers (mainly from China) will attend the Expo. We believe this is an ideal platform for local business to explore and export to China market.

I also want to highlight on innovation and investment cooperation between the two sides. The third US-China Innovation and Investment Summit (UCIS) will be held in Houston in May this year. UCIS provides a unique opportunity for U.S.-based technology companies to connect with investors, strategic partners, leading incubators/accelerators, and professional service firms from China.  We expect a high turnout from both Chinese and U.S. companies.

Q: You recently had an important Holiday. Can you tell us a little about Chinese New Year?

A: Chinese New Year is also known as the Spring Festival. The 2018 Chinese New Year was on February 16, and its date is determined by the Chinese lunar calendar. Every Chinese New Year corresponds with a specific Chinese animal zodiac. 2018 is the Year of the Dog. The Year of the Dog means fortune, loyalty and luck in Chinese culture. People eat dumplings, play fireworks, lanterns and enjoy festivity everywhere. I’m glad to see that more and more foreign friends are joining us to celebrate the holiday, because people’s aspiration for happiness and prosperity are universal. Let me be the first to wish you  “Xin Nian Kuai Le!”(Happy New Year).

A: The conduction of the 301 investigation and the related restrictive trade measure is a typical unilateral trade protectionist action, in disregard of China’s strengthened protection for intellectual property rights, the WTO rules and the call of the business community. China firmly opposes it.

As the world’s top two economies, China and the US should respect each other, seek mutual benefit and reciprocity, focus on cooperation and properly handle differences, and ensure the sound and steady development of our economic and trade relations. This will be conducive to upholding global economic stability and normal international trade order, which is also the shared aspiration of the international community.

China-U.S. trade relationship is mutually-beneficial in nature. The unilateral actions undertaken by the U.S. will directly harm the interests of U.S. consumers, companies, and financial markets. Apparently, the imports of low-cost, labor-intensive products from China have considerably lowered the consumption cost for American consumers.

The actions will also do harm to the cooperation between China and the Southern US, including Texas. The local business community has voiced concerns that those actions may derail their efforts to attract Chinese investment, in energy, technology and health care sectors in particular.

China does not want a trade war with anyone. But China is not afraid of it. China is confident and capable of facing any challenge. If a trade war was imposed, China would fight to the end to defend its own legitimate interests with all necessary measures. 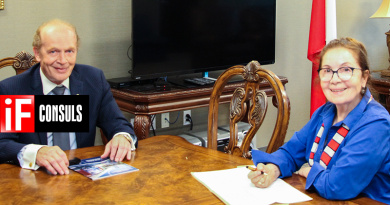 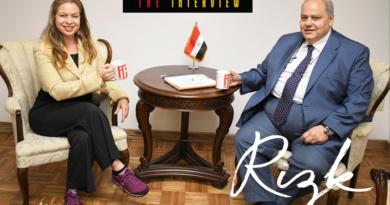 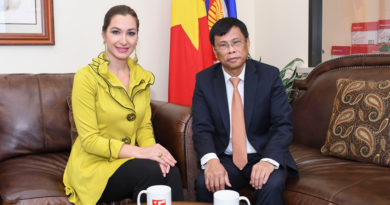