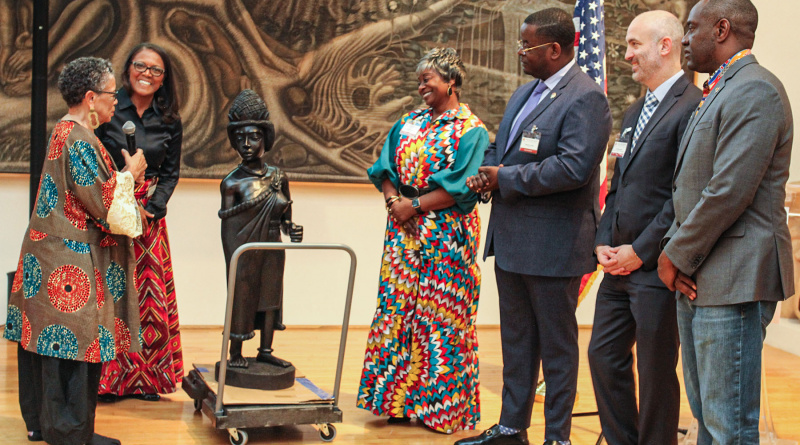 The event sponsored by the Houston-Luanda Sister City Association (HLSCA) at Texas Southern University to celebrate the 47th anniversary of the country of Angola’s independence was definitely memorable. But it became even more so when the gift from the HLSCA to the Art of African Diaspora and Beyond exhibit at the university museum was unveiled. The statue is a rendition of the legendary Njinga Mbandi.

Njinga Mbandi (1581-1663) was queen of the kingdoms of Ndongo and Matamba and defined much of the history of 17th century Angola. Her existence also emphasizes the long story connecting the U.S. and that part of Africa. The first slave ship to arrive in the U.S. in 1619 had left from that area during the reign of Njinga Mbandi. She became queen after the deaths of her father and brother and during her 37-year reign she fought against the slave trade and for the independence of her kingdoms against the Portuguese.

In her acceptance speech Alvia Wardlow, museum director and curator, said the newly acquired statue will definitely reside in a place of honor and will include an explanation of its significance.

The Honorable Ana Paula Do Nascimento, consul general of Angola in Houston, began the evening’s program by reiterating how Houston and Luanda, the capital of Angola, have been sister cities since 2003. She reminded the audience that Luanda is the only one of the 19 cities worldwide linked to Houston that is in Africa.

Sheila Jackson Lee, who represents the 18th District in Texas, was also slated to speak, but congressional business kept her in Washington.  Deputy District Director Eric D. Goodwine, spoke in her place and presented the consul general with a certificate on behalf of the Congresswoman.

The keynote speaker for the evening was Nzogi Bruno Filipe, General Manager of Finance for Chevron International Exploration and Production.  He emphasized Chevron’s energy efforts in a short film showing ongoing deep-sea oil and gas exploration and extraction. Chevron’s connection with the Houston-Luanda Sister City Association runs deep, since it was a founding corporate member of the association. Its major contribution this year has been sponsoring the gala as well as shipping the statue of Njinga Mbandi from Luanda to Houston.

“Sea Monsters Unearthed: Life in Angola’s Ancient Seas” was another short film on the agenda. Fossils found in Angola that are 88 million years old have been on exhibit at the Smithsonian Museum of Natural History since pre-Covid said Dr. Louis Jacob, professor emeritus at South Methodist University and the project originator.  He said 4.8 million individuals already have seen the exhibition. It will begin touring the U.S. soon and eventually be on display in Angola.

On the lighter side, Engracia Matias, an Angolan author based in the U.S., showed the audience a slide of her latest children’s book, “A Zebrinha.”  It is available on Amazon in both Portuguese and English.  She emphasized that this is one way young Angolan children living in the States can learn that the story about the zebra is set in their country of origin, not the U.S.

In her presentation Fatima Benge, Houston-Luanda Sister Cities Association president, closed the evening’s program by distributing certificates of recognition earned by certain institutions and individuals in both Houston and Luanda for their outstanding efforts assisting the HLSCA in 2022. The corporations mentioned were Chevron Middle East, Africa, South America Exploration and Production Co. and Sonangol USA, the Angolan national oil company.

Individuals honored were Madalena Piedade for organizing the grassroots movement in Angola to participate in the National Basketball Association (NBA) Africa junior leagues (male and female) in Luanda and Dr. Robert Ford for doing the same in Houston; Dr. Marcos Agostinho for sponsoring Charles Washington, the Houston artist who recently spent ten days in Angola as part of the Angola AIR (Artist in International Residence) program and Dominick Maia for facilitating the delivery of the art-related books donated by Houston museums and individuals for use by artists, students and the general public in Luanda.

By Nancy A. Dean, HLSCA board member 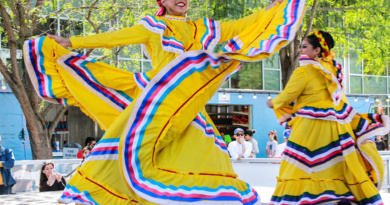 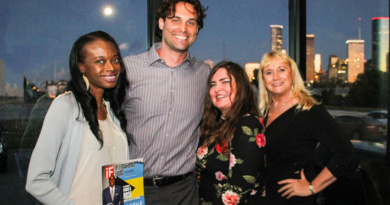 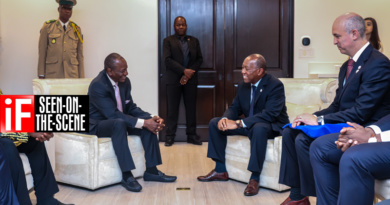 Dinner with H.E. Alpha Conde, President of the Republic of Guinea