Peli Peli is an award-winning South African restaurant concept whose locations are both ranked in the top 10 in Houston according to TripAdvisor and Yelp, represents Houston’s progression in diversity of culture and people.  With four current locations in Houston and two more locations opening in 2018, Peli Peli’s South African-inspired menu includes inspiration from Indian, Portuguese, Dutch, British and American cuisine.

Chef Paul Friedman, Executive Chef & Founder, has been featured on the Food Network’s Cutthroat Kitchen and CNBC’s Restaurant Startup.  Friedman immigrated to the United States in 1980 from Johannesburg, South Africa, and opened a South African concept called Mike’s Kitchen when he arrived. It did not do well.  “I think the timing was wrong and I didn’t understand the American palate at that time,” says Friedman. “With Peli Peli, it’s my chance to present the unique and diverse flavors of South Africa in a manner that people can get excited about.”

That they do! I first stumbled upon them for a charity function then again an award show hosted there and numerous other casual dining experiences as well. It’s perfect for any occasion. You will feel like you’ve stepped onto the African plains as the wavy colors change on the walls to represent the desert as #iF the sun is setting and rising. Derived from a childhood field trip scene, Paul had visions of, is an abstract Acacia tree (tree of life) that now rests in the middle of a stunning energetic feel and warm service! A bold decor that matches the creator’s colorful personality which you can read in his book,”From a Jew to the Stew: Can You Trust a Skinny Chef?

The Peli Peli journey began when its first location opened at Vintage Park (Northwest Houston) in 2009 and its location at the Houston Galleria in 2015.  Peli Peli Kitchen, a fast casual concept featuring South African-inspired comfort foods such as naan tacos, plates, burgers and sandwiches, opened in 2016 and recently won Eater Houston’s award for “Best Fast Casual Concept” in 2017. When you order ‘The Tour of South Africa’, your experience will first entail: Sauteed chicken livers in a Cacciatore sauce for the first course in the appetizer category. The other award winning recipe called the Bobotie is the most popular as a layered spiced minced beef bottom cottage pie dish, inside is a carrot mash with potatoes, leeks, onions, cilantro, and finally mango chutney on the pastry top. A white flaky King Clip fish blackened, Chilean sea bass stuffed mushrooms in a spicy cream reduction sauce drizzled all over. A rice pilaf withsauteed calamari, scallops & Peli Peli shrimp scampi. South African tiger palms shipped directly from South Africa. Portuguese inspired Espanada fillet is cut into medallions, garlic butter drips down into the Espanada from the top of the pole where there are holes to allow the sauce to dance down as it soaks down into every crevice of the meat. All made with Chef Paul’s special spice concoctions that add a special layer to everything. New dishes on the menu have included a Capetown skillet, a stuffed Snapper dish & the grand brunch choice of a waffles and chicken duo! I got to see these the day they were introduced and see the customer’s pleasure first hand. I hear the Sticky Toffee pudding with vanilla bean ice cream is out of this world & they even gave vouchers for Chevron marathon racers to treat themselves with an entree purchase after the race! This is only one little example of their community contributions as they can be constantly found giving to organizations and not afraid to get their hands dirty participating in any culinary challenge!

Co-Founder, Thomas Nguyen, who helped me with thus report says: “Peli Peli Kitchen was created to allow more people to experience our melting pot of flavors, and we want our menu to reflect the diversity that you see here in Houston. It is our goal to create the most multicultural restaurant in Texas.”

Up next for Peli Peli includes a flagship location in downtown Austin at 3rd & Colorado next to the W Hotel and hopes to open by May 2018.  An additional Peli Peli Kitchen is slated to open in fall 2018 in Houston.

Peli Peli, with locations at 110 Vintage Park Blvd, Houston, TX, 77070 and The Galleria at 5085 Westheimer Rd, Houston, TX, 77056, Cinco Ranch at 23501 Cinco Ranch Blvd and Peli Peli Kitchen at 9090 Katy Freeway, features South African cuisine by Executive Chef Paul Friedman. The restaurant has received numerous awards, including 2013 Chef of Chefs Award Winner at Wine & Food Week in The Woodlands and Top 100 Best Reviewed American Fare Restaurants in the U.S. by Opentable®, among others. Both Peli Peli locations are currently ranked in the top 10 in Houston by TripAdvisor®. 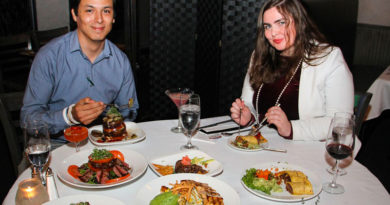